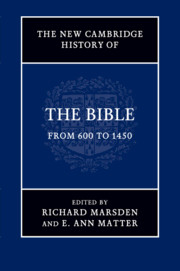 The original Cambridge History of the Bible was published in three volumes between 1963 and 1970 and became an essential and trusted resource for all with an interest in the evolution and use of the Bible in its various manifestations from the beginnings to the present day. At the start of the new millennium, however, the desirability of replacing this History with a completely new one, which would take account of the considerable advances in scholarship made in almost all biblical disciplines during the previous forty years and respond to the new scholarly concerns of the twenty-first century, prompted Cambridge University Press to appoint a steering committee of international academics to plan it. The four-volume New Cambridge History of the Bible is the result.

The present volume is the second and traces the history of the Bible from Late Antiquity to the eve of the Reformation. It is both bigger and more comprehensive than its predecessor in the earlier History (also volume 2, edited by G. W. H. Lampe). We have aimed to present a more balanced treatment of eastern and western biblical traditions and especially to highlight the reception and study of biblical texts among Jewish and Muslim scholars, thus illuminating the important role of the Bible in medieval interreligious dialogue. We have given far wider coverage to the many scriptural languages of the Middle Ages, some of them ignored or barely mentioned in the earlier volume, including Ethiopic, Armenian and Georgian, and the Scandinavian and Slavonic languages. Also included is more extensive consideration of biblical influence on medieval secular literature and the visual arts; two substantial chapters treat the transformation of biblical narratives into public representation in a variety of media. Throughout the volume, the contributors have made extensive use of recent research, not least that on the materials of the Cairo Genizah, which has increased our knowledge of Hebrew and Greek textual history.