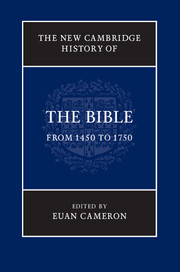 In the Western Catholic Church of the early sixteenth century, the Bible as a canonical and printed book had little place in worship, but Scripture most certainly did. This is because in worship in every tradition there is always a canon within the canon, or a liturgical canon. Medieval liturgical rites were contained in a series of books, each appropriate for the personnel needed for the performance of a particular rite. The reason for this practice was in part utilitarian, since prior to printing it was impossible to have every text needed for everything in one book. Thus for Mass the celebrant would need a missal, but the cantor would need an antiphoner. Although printing had made it possible to compact the liturgical texts, and to produce smaller tomes, the tradition continued of providing separate books for different purposes. For the Mass, the liturgical Epistles and Gospels were collected in different books, the epistolary and the evangelary. The system of readings can be traced back in the Romano-Frankish tradition as found in the Comes of Murbach, an eighth-century lectionary. Likewise, for the eight Daily Offices a psalter was needed, a hymnal and a Collectar, but also a Legenda for the small portions of Scripture that were to be read at each of the offices. The selection of the readings was in part dictated by the liturgical calendar, the appropriate pericopes being selected for the feast and season. There are certainly examples of early medieval Bibles being marked for liturgical use, but as a distinct lectionary emerged, the lectionary and printed pericopes made it unnecessary for an actual Bible to be used. The non-Roman Western Mass (Gallican, Milanese and Visigothic) had three readings: an Old Testament, Epistle and Gospel; but, from perhaps the sixth century, Rome itself had adopted two readings, an Epistle (sometimes an Old Testament reading survived in place of an Epistle) and Gospel. But the Mass was also punctuated with chants which varied according to the season, and provided a short commentary or elucidation on the main lections. Geoffrey Cuming noted, ‘the Whole system is a model of devotional use of the Bible’.