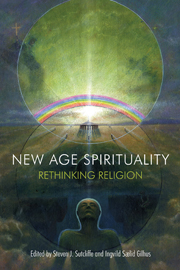 2 - “All over the place”: the contribution of New Age to a spatial model of religion

“New Age” phenomena are frequently seen as atypical forms of religion, and a specific terminology is created to describe them. This terminology includes, for instance, terms like “New Age” itself, “New Religious Movements”, “new religiosity”, “neo-spirituality”, “spirituality”, “alternative religiosity”, “alternative spirituality”, and “holistic” Terms and theories establish the research object, which also means that terms highlight some aspects of a phenomenon and leave other aspects in twilight or darkness. Do the terms mentioned above point at the most characteristic aspects of the phenomena they describe – and if not, what terms could be used instead? In this chapter I will discuss the terminology of New Age phenomena in relation to a specific model for the study of religion and argue that to develop a fruitful terminology, it is necessary to develop a more complete and dynamic picture of contemporary religion. Religion in both the historical Roman Empire and in contemporary Norway is used as an example, and my broader argument is that a historical approach can provide important comparative insight into a phenomenon usually considered ur-contemporary.

The terms mentioned above are problematic for several reasons. One problem is that they imply a polarized approach. Most of the terms situate their objects as secondary in relation to established religious institutions and religious power, for instance by using the prefix “new/neo” or the term “alternative” The dominance of the “world religion” category implies that “New Age” phenomena in the Western world are seen in relation to Christianity and to established churches.