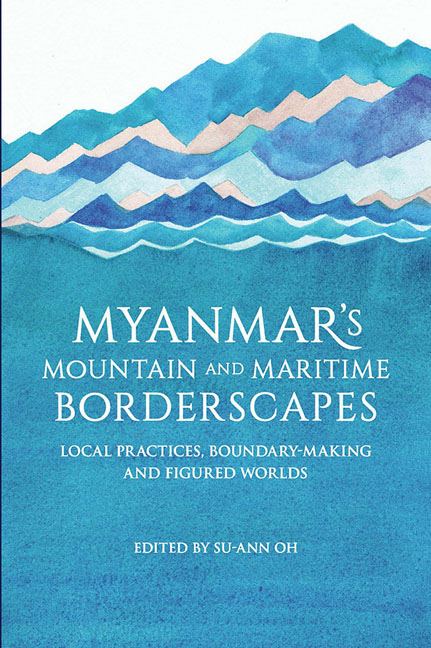 Often viewed as marginal spaces at the edge of a nation, borders are in fact sites of social, political and cultural change that impact local and national politics. This edited volume underscores this relationship by drawing attention to the significance of the frontier regions in defining and exemplifying many of the dilemmas that beset Myanmar. As van Schendel and de Maaker assert, “[t]he making of borders cannot be separated from attempts to define nations” (2014, p. 3).

The border is often understood as the “line of physical contact between states” (Paasi 1999b, p. 13). In everyday parlance and in the field of international relations, borders are taken to be stable features that separate one nation state from another (Minghi 1963, p. 407), created by and negotiated between state agents, and codified in maps.

This book takes a different approach. It conceptualizes borders — and boundaries — as social practice — processes rather than objects (Berg and van Houtum 2003; Baud and van Schendel 1997), verbs rather than nouns (van Houtum 2011, p. 50) — that are constantly being enacted.

The production and reproduction of boundaries is part of the institutionalization of territories — the process in which their territorial, symbolic and institutional ‘shape’ is determined (Paasi 1991). Therefore boundaries manifest themselves in numerous social (economic, cultural, administrative and political) practices and discourses that may be simultaneous and overlapping (Paasi 1999a, p. 670).

Boundaries may be viewed as constituting

lines of separation or contact [that] may occur in real or virtual space, horizontally between territories, or vertically between groups and/or individuals. The point of contact or separation usually creates an ‘Us’ and an ‘Other’ identity, and this takes place at a variety of sociospatial scales (Newman and Paasi 1998, p. 191).

Looking at this obversely, we can say that the act of creating boundaries is the act of constructing figured or symbolic worlds. Practice theory is used in this introductory chapter to frame local practices of border-, boundaryand world-making while referencing larger structures and sociohistorical production. This enables us to consider Myanmar's frontiers not just as entities defined by the border but as spaces where symbolic worlds emerge from local context, partly transforming widely circulating models of nation, identity and culture, and vice versa.