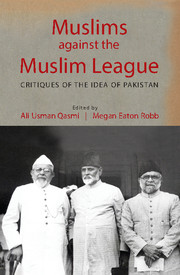 Speaking at a huge gathering in Delhi during the 1940s, Ata Ullah Shah Bukhari, the fiery leader of Majlis-i-Ahrar, a religio-political organization known for its radical anti-colonialism and as an ally of the Indian National Congress, narrated an anecdote. A mother gave 4 annas (a quarter of a rupee) to her son, Muhammad Ali, to fetch kerosene from the shop around the corner. The lad went to the shop and asked for 4 annas worth of kerosene. The shopkeeper filled the oval shaped clay pot to the brim. ‘Won't you give me a chunga with this?’ asked the boy. The shopkeeper replied, ‘The pot is full; where should I put the chunga?’ The boy upended the pot and pointed towards its opening. The shopkeeper obliged and put the chunga there. The boy went home and handed over the pot to his mother. Surprised that there was hardly any oil in the pot, the mother asked, ‘Beta [my son] Muhammad Ali, only this much oil for 4 annas?’ Muhammad Ali boasted: ‘No mother, look there is a chunga with it as well.’ A wry smile appeared on Bukhari's face as he concluded in front of the massive audience, held spellbound by his oratory: ‘This Pakistan triumphantly presented by Muhammad Ali Jinnah as a solution for Muslims who are a quarter of India's population is also like this chunga.’

This was Bukhari's rhetorical contribution to the debate on Pakistan. More seriously, he talked about the impracticality of the two wings of the proposed Muslim state being separated by thousands of miles of an ‘enemy territory’ of Hindus. Such a solution, he said, would divide the strength of South Asia's Muslim population, deprive them of their claims to the heartland of Indo- Islamic civilization in North India, and for the first time since the age of Ashoka give ownership of a vast empire to Hindus. Bukhari was not the only leader, nor Ahrar the only religious or political organization, to raise such concerns. The Azad Muslim Conference held in April 1940, just a month after the passage of the famous March resolution demanding separate Muslim states, was a massive gathering of Muslim organizations opposed to the Muslim League's demand for a Pakistan based on its two-nation theory.