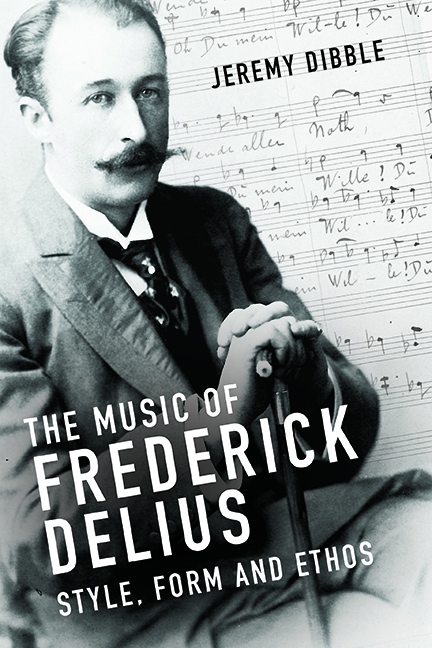 My introduction to the music of Delius took place while I was a schoolboy of about fourteen years of age. A copy of Eric Fenby's Delius in the Faber series of ‘The Great Composers’ lay among the books on music in my grammar school library at Buckhurst Hill, though I suspect its presence was due to my most enlightened and gifted music master, John Rippin. Such teachers make a lifetime of difference. After communicating an interest in this unfamiliar composer, I was plied with scores and records of numerous Delius works. I particularly remember being given a ten-inch LP recording of Anthony Collins's interpretation of The Walk to the Paradise Garden and On Hearing the First Cuckoo in Spring, recordings which I still hold dear. Before I was sixteen, however, I had come to know the Songs of Sunset (with John Shirley Quirk and the immortal Janet Baker), the Requiem, Paris (a work I have always loved for all its unevenness), the Dance Rhapsodies, A Village Romeo and Juliet, In a Summer Garden and The Song of the High Hills. Through Rippin’s careful tutelage, I read Eric Fenby's Delius As I Knew Him by which I became acquainted with A Song of Summer, Cynara, the Violin Sonata No. 3 and the Songs of Farewell. With John I made the pilgrimage to the grave at Limpsfield and I also had the chance to meet Fenby, just before he was about to fly out to Jacksonville in 1978 to receive an honorary degree and also at the Bracknell Festival where he appeared in the capacity of conductor. My last meeting with Fenby was just before I was about to begin my PhD in 1980. As a sales assistant in the Toys Department of John Lewis in Oxford Street, I encountered him one afternoon when he appeared with a grandson, looking for a small bicycle with stabilisers. After the transaction was completed, I think he was most bemused to confront an unassuming sales assistant interested in Delius, but who also recognised him as the composer's amanuensis! I shall never forget this kind man, and how he expressed such an interest in my own research (at that time, on Parry) on which I was about to embark.