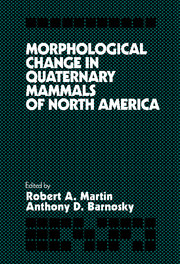 8 - Quantitative and qualitative evolution in the giant armadillo Holmesina (Edentata: Pampatheriidae) in Florida

The formation of the Panamanian isthmus in the late Pliocene permitted widespread faunal interchange between North and South America. Previously, edentates (or xenarthrans) had been limited to South America since the Paleogene and had there undergone a moderate radiation into three major clades: the shelled cingulates (three families), the anteaters (one family), and the sloths (a minimum of four families). Two sloth genera, Thinobadistes and Pliometanastes, appeared in North America in the late Miocene, heralding the forthcoming interchange. The emergence of Panama increased the probability of faunal interchange, and eight edentate families dispersed into North America during the late Pliocene or early Pleistocene with varying success. The Pampatheriidae is a distinct lineage of shelled edentates, now accorded familial rank (Engleman, 1985; Edmund, 1987) and separated from both the Dasypodidae (within which they were long regarded as a subfamily) and the Glyptodontidae. Edmund (1987, pp. 6-7) listed character states that distinguish pampatheres from the other two cingulate families.

The presence of pampatheres in North America was first recognized by Leidy (1889) on the basis of isolated osteoderms collected in Florida. During the ensuing century, numerous additional specimens of pampatheres were collected in North America, predominantly from Florida, and to a lesser extent from Texas (James, 1957; Edmund, 1987). Webb (1974) and Robertson (1976) were the first to describe pre- Rancholabrean pampatheres from Florida. They demonstrated that a very large size difference separated Blancan and Rancholabrean pampatheres in Florida, with some Irvingtonian populations being of intermediate size. Prior studies had necessarily been limited to Rancholabrean specimens and thus could not have detected any significant evolutionary change.