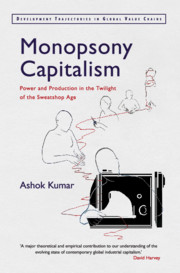 Introduction: The Enduring Age of the Sweatshop

On 23 April 2013, a national strike or hartal, called by the official opposition to Bangladesh's ruling Awami League, was in its third day and traffic in Dhaka was lighter than usual. Factory owners were under pressure to get their employees back to work. Only a few weeks earlier, the Bangladesh Garment Manufacturers and Exporters Association had reported that the combined cost of recent hartals was estimated at $500 million. Workers were scarce throughout the area's industrial corridors, but could still be found in Rana Plaza, a towering structure that loomed over the Dhaka-Aricha Highway. There, 20 miles from Dhaka in the town of Savar Upsala, on the main artery connecting the city to its garment districts in the suburbs, some five thousand workers worked on eight cramped floors, making clothes for Walmart, Primark, Mango, Benetton, and other Western brands.

Like a Bollywood villain, the man who owned the place could be seen driving around the town on his motorcycle, ‘as untouchable as a mafia don’, accompanied by several paid heavies. His name was Sohel Rana and he had acquired the land for his five-factory complex – which he humbly named after himself – through threats and intimidation, obtained building permits through bribes and graft, and constructed its top floors with no regard to government regulations. His position as Secretary of the local student chapter of the Awami League had enabled him to exercise control over local strikes and use them as bargaining chips. Rumours about guns and drug smuggling on the side had long been circulated.

The sound of an explosion echoed through Sohel Rana's third floor. Terrified workers ran outside and were told by supervisors to leave early. An engineer, Abdur Razzak, was called in to inspect the deep cracks that now appeared in the concrete pillars and walls. He warned that the building was structurally unsound, declaring it ‘vulnerable’. But Rana would not accept this verdict. As reporters arrived on the scene, he gestured at the damage, explaining, ‘This is not a crack … the plaster on the wall is broken, nothing more.