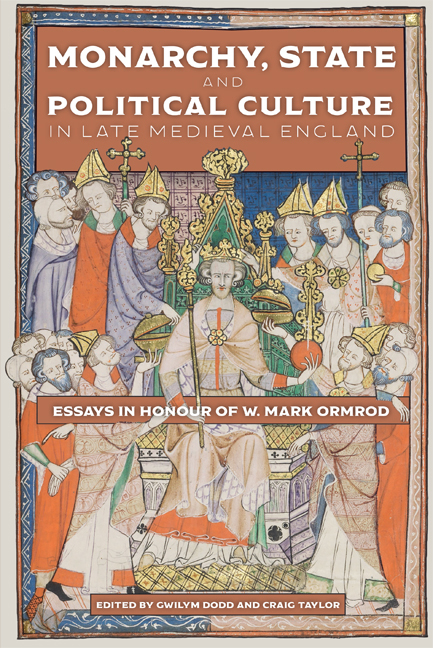 5 - Law and Arms: The Politics of Chivalry in Late Medieval England

THE MONARCH's RESPONSIBILITIES WERE eloquently symbolised in the two images on the obverse and reverse respectively of the great seal: the sovereign enthroned in majesty bearing the sword of justice; and as a knightly warrior on horseback with shield in one hand and outstretched sword in the other. This image highlights the monarch's constitutional proprieties, which were set out in his coronation oath and embodied his personal obligations to the realm. He undertook to the best of his ability to preserve peace and concord for the sake of God's church, clergy and people, maintain, defend and uphold ‘the just laws and customs which the people shall have chosen’ and ‘in all your judgments see that right and impartial justice is done in mercy and truth’. It was a potent image that accompanied the putting into effect of royal commands and was reflected in illuminated miniatures portraying the opening words of Bracton's De Legibus et Consuetudinibus Regni, which in turn echoed the Roman Emperor Justinian's maxim: ‘Clothed with arms, armed with laws’.

The historiography of late medieval England and in particular the ‘long fourteenth century’ has benefitted considerably from renewed focus on constitutional, legal and administrative history. Through his revisionist work on the fifty-year reign of Edward III and a wider concern to foreground and understand contemporary political culture, Mark Ormrod has done much to restore to the picture the significance of the person (and personality) of the king. He has also sharpened focus on the intricate workings of royal government, especially the judicial and financial institutions (and their personnel) that underpinned its operations. His examination of kingship and what it meant to be king has stimulated a growing body of scholarship reappraising the reigns of monarchs and the role played by royal consorts in maintaining or destabilising the body politic and determining attitudes towards the crown. As Ormrod himself concludes in his influential biography, whatever Edward III's personal shortcomings, he was revered as a model ruler. Even a century after his death he was perceived to have conformed to the ideal of chivalric kingship, balancing valour with upholding the law: ‘this noble prince, this princely knight, this knightly conqueror so loved’, in whose days ‘God [was] obeyed, the course and recourse of merchandise justly kept and the order of the law [was] duly observed’.