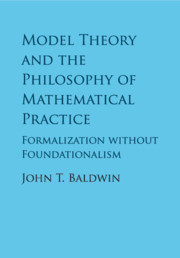 Infinitary logic occupies a peculiar place between first and second order logic. Since infinite conjunctions are manifest in the very definition it seems less secure than second order logic which after all has formation rulesmuch like first order. Only after a little thought does one see that second order logic is immensely more powerful and has much stronger metatheoretic commitments, although incomparable in definability strength.

Recall that Lω1,ω allows countable Boolean combinations of formulas but only finite strings of first order quantifiers; L∞,ω strengthens the logic by allowing conjunctions of any cardinality (Chapter 1.3.5). Moore [Moore 1997] describes the ‘continuous development of infinitary logic’ as beginning with the work of Henkin, Karp, Scott, and Tarski in the middle 1950s. Moore also reports a substantial prehistory including Boole, Peirce, Schroeder, Léwenheim, Skolem, Hilbert, Zermelo, and others. The key contentual distinction seems to be that the work up to Zermelo is entirely semantic. Only whatMoore calls the ‘continuous development’ culminating in Karp's completeness theoremand the active school of the 1960s–70s fully incorporates the Tarskian syntax–semantics distinction.

We first consider the role of infinitary logic in formalizing mainstream mathematics by reviewing attempts to formalize the Lefschetz principle. This analysis relies on the completeness of the theory of the algebraically closed field of a fixed characteristic. In Chapter 7.1 we describe the role of categoricity in power for the logic Lω1,ω and investigations of the theory of complex exponentiation. Chapter 7.2 surveys the connections among many areas of logic arising from Vaught's famous question, ‘Does the continuum hypothesis hold for the countable models of a first order sentence?’ In Chapter 7.3 we return to second order logic with a slight twist.We consider second order logic with infinite conjunctions of various lengths.

Why Infinitary Logic? The Lefschetz Principle: We discuss an example of logicians carefully choosing an appropriate logic to formalize a well-known heuristic principle. These local foundations are tested against a goal set by AndréWeil. The Lefschetz principle was long known informally by algebraic geometers and appeared in Lefschetz's 1953 text, Algebraic Geometry. Barwise and Eklof describe the issues around formalizing the Lefschetz principle as follows.