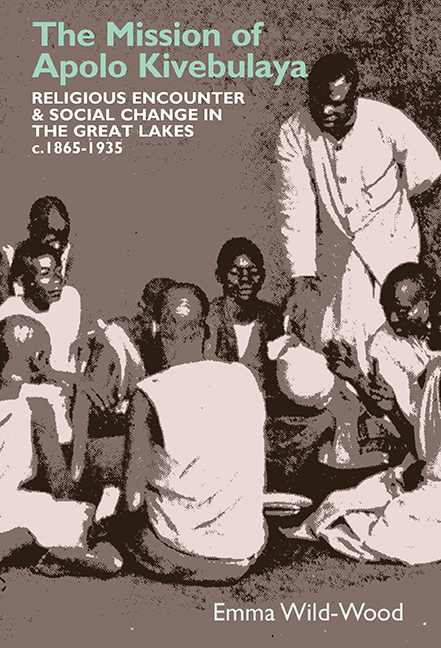 The Mission of Apolo Kivebulaya
Religious Encounter & Social Change in the Great Lakes c. 1865–1935
Buy print or eBook[Opens in a new window]

Introduction: Kivebulaya and religious change in the Great Lakes

‘Deeply regret Apolo died May 30’, announced the telegram that arrived in Church Missionary House, London, on 31 May 1933.1 Within twenty-four hours of his death in Mboga, Congo, the Church Missionary Society (CMS) supporters in Britain knew of the passing of Canon Apolo Kivebulaya. The telephone line from Mboga permitted news to travel with speed across the globe from a village still largely accessible only on foot. Kivebulaya was a great admirer of novel technologies and spent a lifetime disseminating them to mountain and forest villages so it was fitting that his friends and collaborators in Britain heard of his death in this way. Revd Aberi Balya, later Bishop in the Church of Uganda, was at Kivebulaya's deathbed. Immediately after the funeral, Balya toured the churches of the Mboga area, to administer communion and comfort the Christians with whom Kivebulaya had spent his last seventeen years. Whilst Mboga grieved, Kivebulaya's admirers in Buganda were already penning obituaries for Matalisi and Ebifa mu Buganda, eulogising his life in prose and poetry for a mourning public. On 1 June Bishop John Jamieson Willis spoke at a memorial service for Kivebulaya in Namirembe Cathedral, Kampala. He compared Kivebulaya's dedication to mission to that of St Paul, saying that he knew of no European or African who exceeded Kivebulaya in endurance and commitment. The large congregation departed with ‘their souls filled with Apolo’. Young men were moved to offer themselves to the Native Anglican Church for missionary service. Blasio Kigozi, whose passionate plea in 1936 for the church to ‘Awake!’ would influence a widespread renewalist movement known as the East African Revival, was among those who hoped to emulate Kivebulaya. Retired CMS missionary, Albert B. Lloyd, responded to the news of his friend's death by returning to Africa and taking up Apolo's mantle as missionary in Ituri for a year. From Mboga, Lloyd completed the third of his popular biographical accounts of Apolo’s life, Apolo the Pathfinder: Who Follows? (1934), portraying Apolo as an exemplary missionary whom British Christians should emulate. For all these men, Kivebulaya was a prime example of one whose ‘self’ was so ordered that he gave self-less service to Christ, so to show a new way of patterning communal life.