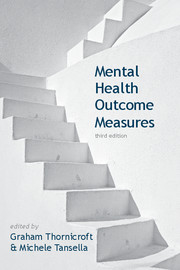 In my years as a junior doctor in a general medical ward, I was often impressed by the gap between what the patient had originally complained of and the leads followed by the medical team in pursuing an unexpected abnormality in a routine investigation, which in fact had little relevance to the patient's actual concerns. Later, while training in psychiatry, I was interested to observe how clinical psychiatry followed a similar pattern: procedures were carried out which made sense to the clinical team but had little relevance to the patient.

This new edition of Thornicroft and Tansella's review of outcome measures marks an important step in the development of mental health services, in that major emphasis is now given to aspects of outcome that are valued by the service users themselves. In Chapter 1, Kabir and Wykes review this important field, and point out that users are more interested in recovery and happiness than in remission of presenting symptoms. Even measures of ‘satisfaction with services’ that are not devised in collaboration with users come in for a critical examination.

However, another new area of interest, identified by the editors in the Introduction, is indeed the currently fashionable concept of ‘recovery’, which gets an extended treatment in Chapter 4. As a retired psychiatrist, I found the new enthusiasm for full recovery rather strange, as it appears to imply that such an aim is something new and (worse still) always achievable. However, it emerges from Chapter 4 that there are in fact a range of meanings ascribed to the concept of ‘recovery’, ranging from the fairly modest aim of living as well as possible to the more utopian one of having a fulfilling, meaningful life and a positive sense of identity founded on hopefulness and self-determination.

Failure to achieve ‘full recovery’ may not be due either to incompetence on the part of the clinician or to lack of motivation on the part of the patient; it is often due to the severity of the underlying disorder. It seems to me important that, rather than inwardly apologising to themselves for incomplete recovery, clinicians should adapt their energies to enabling users to achieve more personal autonomy.