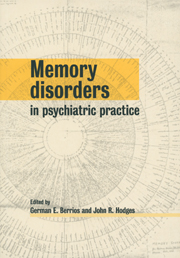 The recent appearance of many excellent books on memory (and its disorders) attests to the growing interest in this clinical field. Whether out of theoretical interest, or driven by shared social anxieties relating to a putative dementia ‘epidemic’, these publications concentrate on memory deficits arising in the context of brain disease. This emphasis may give the (wrong) impression that the investigation and management of patients complaining of poor memory are now the exclusive preserve of the neurologist and neuropsychologist.

Historical analysis helps us to understand how this state of affairs has come about. During the nineteenth century, memory complaints of all types (e.g. dysnomias, déjà vu, confabulation, the Ganserian state, paramnesias, etc.) were accepted at face value, i.e. regarded as genuine ‘memory disorders’. However, after the 1880s the concept of memory (and its disorders) was narrowed down. Whilst undoubtedly benefiting the study of the ‘organic’ disorders of memory, this change cut asunder patients with a range of memory complaints including delusions and hallucinations of memory, déjà vu, the Ganserian state, etc. who, because they had ‘negative investigations’, were no longer considered as suffering from a ‘memory problem’. Unfortunately, the concept of ‘negative investigation’ remains a relative one for it is determined by the sensitivity and specificity of the tests available in each historical period.

It is also the case that the (welcomed) collaboration between the new breed of cognitive neuropsychologists and clinicians has resulted in ever more refined clinical subgroups. Because some of these syndromes are dependent upon emerging concepts and complex psychometric profiles, their identification remains difficult, particularly in the busy environment of a neuropsychiatric clinic.