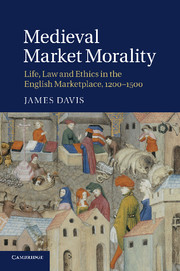 The conduct of market traders, customers and officials was informed by shared moral concerns, which were reinforced and reflected by the educated elite of Church and state. Ethical and economic issues relating to the marketplace were addressed in a variety of sources, by theologians, friars, canonists, moralists and secular complaint poets. They discussed money, justice, value, profit, contracts, usury and other commercial activity, primarily with moral issues in mind and a focus on the spiritual salvation of the individual. To this end, certain moral principles were recurrent throughout the late medieval period, and traders were reminded continually of their communal responsibilities, especially towards the poor and vulnerable. In particular, petty victuallers who supplied the necessities of life were expected to adhere to a consensus regarding the ‘common good’ and social justice.

Most medieval writers viewed economic practices in terms of morality, ethics and the values of the Christian Church. However, this should not lead us to assume that they were ignorant of market forces and the economic processes that determined the circulation of goods. Indeed, there was an underlying economic dilemma in many medieval writings about how to achieve equity and benefit in markets. How were moral concerns and justice to be met while not inhibiting or undermining market prosperity and the livelihood of traders? Medieval moralists also grappled with the seeming contradictions of commercial life. Trade was often regarded as counter to the Christian ideal of an agrarian subsistence lifestyle, as well as providing unavoidable temptations to sin. Yet, many medieval writers also recognised that commerce was economically necessary and even beneficial for the common good. In the context of growing commercialisation and a developing market society, some writers demonstrated certain anxieties as they discussed the role of market trade within medieval society. They often reacted to the contemporary economic environment by emphasising the potential sinfulness of commercial pursuits and the constant clash between private motivations and public duty, between personal interest and the common good. Not all writers agreed on the relationship of trade to society, or what market activities were justified; nor did they approach the subject in the same manner, particularly those writing within different genres.