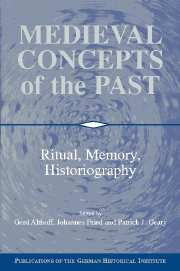 Medieval Concepts of the Past
Ritual, Memory, Historiography
Buy print or eBook[Opens in a new window]

4 - Rebels and Rituals: From Demonstrations of Enmity to Criminal Justice

Medieval kings faced many problems. The most persistent ones were the relations with the people they somewhat euphemistically called their “faithful ones” - fideles - the great princes or barons on whose consent the kings' capacity to act depended. The greater part of medieval historical writing deals with the feuds of these great men with each other, lesser nobles, or their kings. We, and in fact royal-minded contemporaries, call the last rebellions. The term rebellion carries the notion that feuding with the king was something quite different from regular noble warfare, that it was, indeed, illegitimate, a notion that the kings and their ecclesiastical propaganda staffs tried to drive home in many ways. Because they were the ones who put their ideas into writing, it is predominantly their views we read. The nobles who made war on their kings thought quite differently about it and claimed - justly or unjustly - that they were defending their rights against a king turned tyrant. How did the kings deal with these formidable rebels? They tried to fight them, to be sure, but it is generally believed that the kings also tried to make use of their supreme judicial authority and make the nobles account for their deeds in the royal law courts.

Heinrich Mitteis analyzed a number of notorious trials of mighty nobles dating from the tenth to the twelfth centuries and argued that procedurally they all ended in verdicts for contumacia, that is, verdicts for not having appeared in court. Mitteis assumed that all these noble defendants preferred not to stand trial, either because in headstrong defiance they refused to accept the king’s justice or because they knew their defense to be hopeless, thus admitting their guilt.