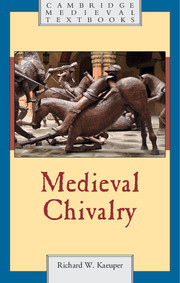 Medieval Chivalry
Buy print or eBook[Opens in a new window]

Insight into chivalric continuity and change can be found in what might seem a minor incident described in one of our finest sources, the History of William Marshal. As the great rebellion broke out against Henry II in 1173, his eldest son, Henry the Young King, turned against his father and prepared to fight for a degree of autonomy he had never been granted, Henry being a prudent father. The Young King's entourage reminded him that he had never been knighted and argued that taking this formal step in the crisis “would make the whole of your company more valorous and more respected, and would increase the joy in their hearts.” According to Marshal's biographer, the Young King accepted their advice and declared he would be knighted by “the best knight who ever was or will be, or has done more or who is to do more…” This was, of course, William Marshal, his biographer tells us. Stepping up to the Marshal with sword in hand, the Young King says, “From God and from yourself, My lord, I wish to receive this honour.” William girded him with the sword and “asked that God keep him most valorous, honoured and exalted…” The entourage viewing this short and simple ceremony is studded with counts and barons (you may be sure!), but the poet proudly says of the Marshal, “And yet he had not one strip of land to his name or anything else, just his chivalry.”

Strong ideas about chivalric function, status, and ideology animate this narrative of an affecting ceremony. The function of the warrior stands out clearly. The Marshal is chosen to knight the Young King because he is the best, and this evaluation comes from a celebrated patron of valorous deeds in tournament on the eve of a civil war in which even more intense fighting could be expected and enacted for higher stakes. In short, the Young King was considered a good judge of the knightly function of prowess; the poet/biographer assures his audience that the Young King, through his generosity to masterful warriors, even those who were landless, will revive chivalry.