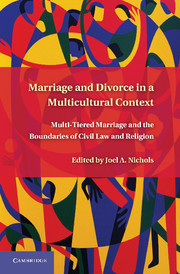 3 - Marriage and the Law

Time for a Divorce?

By
Stephen B. Presser
Edited by
Joel A. Nichols
Show author details

In 2003, the Massachusetts Supreme Judicial Court in Goodridge v. Department of Public Health, by a bare one-person majority, became the first state supreme court to determine that its state constitution requires the state to allow same-sex marriages. In the face of several millennia of human experience almost exclusively to the contrary, the Massachusetts Court somehow discovered that it was “arbitrary” and “capricious” and therefore legally impermissible to limit the benefits of marriage to one man/one woman couples. In the space of just six years, by 2009, five states had chosen to allow same-sex couples to marry, and the Iowa Supreme Court, in a unanimous decision, had essentially embraced the same arguments the Massachusetts court had elaborated. Connecticut, California, Hawaii, and Iowa joined Massachusetts in establishing the unconstitutionality of limiting marriage to opposite-sex couples by court decisions. The California and Hawaii decisions, however, were overturned by constitutional amendments established by popular referenda. Vermont, New Hampshire, and Maine established same-sex marriage by statute.

Same-sex marriage is a roiling political issue. So far, California and Hawaii are the only states where the voters have, in effect, overturned their highest state court’s decision permitting same-sex marriage, but popular action in many other states has resulted in measures designed to prevent state recognition of same-sex marriages. Following the Massachusetts Goodridge decision, state constitutional amendments limiting marriage to heterosexual couples were passed in Alaska, Arkansas, California, Georgia, Hawaii, Kentucky, Michigan, Mississippi, Missouri, Montana, Nebraska, Nevada, North Dakota, Oklahoma, Ohio, Oregon, and Utah. States without such constitutional provisions, but with legislation barring same-sex marriage, include Alabama, Arizona, Colorado, Florida, Idaho, Illinois, Indiana, Kansas, Maryland, Minnesota, North Carolina, Pennsylvania, South Carolina, South Dakota, Tennessee, Texas, Virginia, Washington, West Virginia, Wisconsin, and Wyoming. Still, many of those state statutes are subject to constitutional challenge under state constitutions, if not the federal one. It is likely only a matter of time before every one of them will, in fact, be challenged, and, just as is likely to occur in California and Hawaii, many states will seek to remove state constitutional provisions barring same-sex marriage.