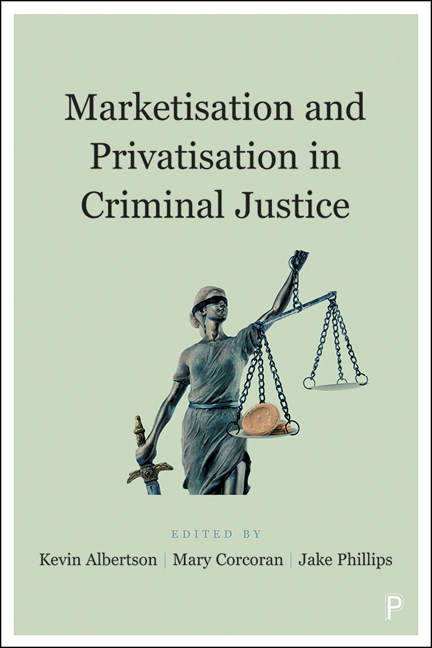 Marketisation and Privatisation in Criminal Justice

Introduction: Marketisation and Privatisation in Criminal Justice: an Overview

Criminal justice used to be thought of as a field that ought to be autonomous from politics and the economy, with the management of crime and punishment being seen as essentially the responsibility of the state. Now, however, it is widely agreed that decades of marketisation and privatisation have blurred the institutional boundaries and functions of the public sector with those of for-profit and civil society interests in many parts of the penal/welfare complex. The ‘mixed market’ in criminal justice services, pursued by successive governments since the 1980s, accelerated sharply in the wake of the Austerity Agenda and the reconstruction of the social economy post the banking crisis of 2007 (Corcoran, 2014). The ascendancy of market imaginaries is such that their influence on policing, prisons, probation, legal services and the courts, let alone numerous ancillary services from prisoner transport to interpretation services, is seemingly irreversible.

The dominance of the market in the public sphere was by no means assured nor consensual. In her classic study of the rise of the life insurance business, Morals and Markets (1979/2017), the economic sociologist Viviana Zelizer observed that ‘the introduction of calculative market principles into a sacred sphere provoked a surprisingly strong resistance that took time and effort to overcome’ (Healy, 2017: xi–xii). The essence of Zelizer's thesis was that the great accomplishment of the life insurance industry entailed the structural and cultural transformations which it achieved in establishing ‘monetary equivalents for those aspects of the social order, such as death, life, human organs and other generally ritualised items or behaviour considered sacred, [that had hitherto been considered] beyond the pale of monetary definition’ (Zelizer, 1979/2017: xxii).

Zelizer's finding that there is no ‘sacred sphere’ which cannot eventually be penetrated by commercialism coincided with the ‘experimental phase of neoliberalism’ when governments in Western capitalist countries were – somewhat tentatively – working to ‘roll back the state in various ways’ (Prasad, 2006: 5). More recently, Sandel's (2000) exposition of the ‘moral limits of the markets’ illustrates the ways in which a market economy can distort human behaviour in such a way as to undermine the very aims of the organisation or context which the market was intended to ‘fix’. This book explores the impact of both marketisation and privatisation whilst recognising that there is no global coherence or universal consistency that maps neatly onto services, sectors or national jurisdictions.