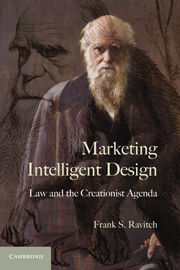 7 - The Madison Avenue Approach to Law and Science

As the scientific historian Ronald Numbers explained, not many creationists adhered to any view of scientific creationism until the early part of the twentieth century. To the extent that science was inconsistent with creationism, most creationists either rejected the scientific evidence or viewed it as part of God's plan. Eventually, however, this changed, and a growing number of creationists began to claim the mantle of science. Movements such as the flood geology movement began to emerge. Flood geology seeks to explain geological phenomena that point to an old Earth as really being evidence of the great flood for which Noah built his ark, as recounted in Genesis. The goal of many of these movements was to use science to support the idea of a young Earth (this was certainly true of the flood geologists). Even those who accepted an old Earth sought to disprove the validity of evolution through natural selection.

This shift represented a new shift in religious apologetics. Religious apologists, such as Cambridge University professor, Anglican clergy member, and naturalist William Paley, presumed that God was the driving force behind the natural world and focused their work on describing that world in detail. God explained the complexity they saw in living organisms and the cosmos, but there was no reason to deny that God did the creating. Paley and other – I will use the term natural theologians – documented the natural world, but their goal in doing so was not to prove a religious point or disprove a scientific one. They had no scientific basis to doubt a divine creator at that time, just as in earlier eras, those studying the cosmos had no way of knowing that the Earth was not the center of the universe.