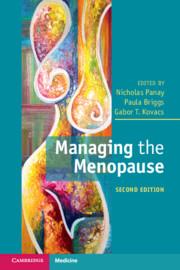 Chapter 15 - Cardiovascular Disease and the Menopause

The age of the natural menopause among women in developed countries is between 50 and 52 years [1, 2] whereas, in the less developed countries, it is 3–4 years less [3]. Deprivation of sex steroid hormones is an important consequence of normal aging and gonadal failure that potentially increases vulnerability to disease in hormone-responsive tissues, including the brain, bone and the cardiovascular system. After menopause, several chronic diseases may emerge, usually by the sixth decade, and these include obesity and metabolic disease, CVD, osteoporosis and arthritis, dementia and cognitive decline, cancer [4]. Obesity is a growing worldwide problem, which exacerbates several chronic diseases. In menopausal women, the incidence of insulin resistance and diabetes has risen exponentially: this translates into an increased risk of CVD and death. If estrogen deprivation leads to altered fat distribution, MHT appears to decrease the incidence of diabetes and also improves diabetes control as indicated by assessment of glycosylated hemoglobin concentrations [5]. CVD is the most common cause of death in women over the age of 50 years. The overall prevalence of coronary heart disease (CHD) is estimated to be 5.1 per cent in women compared with 7.9 per cent in men, and the lifetime risk of developing CHD after 40 years of age is 32 per cent in women and 49 per cent in men; in addition, the incidence of CHD in women lags behind men by 10 years for CHD overall and by 20 years for myocardial infarction (MI) and sudden death. Prior studies have investigated the relationship between menopause and CVD [6]; however, the results have been inconsistent, and the direct causal relationship between menopause and increased cardiovascular risk is still being debated [7]. Major primary prevention measures are smoking cessation, weight loss, blood pressure reduction, regular aerobic exercise and diabetes and lipid control. Primary prevention strategies which are effective in men (use of aspirin and statins) do not afford a protective effect for coronary disease, cardiovascular mortality or all-cause mortality in women [4]. MHT has the potential for improving the cardiovascular risk profile through its beneficial effects on vascular function, lipid levels and glucose metabolism.