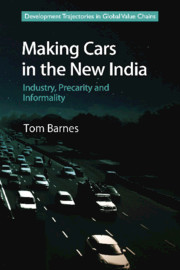 Making Cars in the New India
Industry, Precarity and Informality
Buy print or eBook[Opens in a new window]

1 - The Limits of Industrialisation

There are few people as famous in contemporary India as sporting great Sachin Tendulkar. So, for German luxury vehicle manufacturer BMW, the decision to hire Tendulkar as a brand ambassador represented a major foray into India's vast and rapidly-expanding automobile market.

While not among the largest vehicle manufacturers in the country, BMW's passenger cars and Sports Utility Vehicles (SUVs) represent an upmarket product range for a small minority of affluent, aspiring buyers. This growing consumer base has emerged in a country where, just a single generation ago, any model of passenger car was considered a rare luxury. Even today, cars represent rare opulence for the tens of millions of Indians who continue to live and work in poverty.

Nevertheless, BMW's Indian manufacturing operations and extensive marketing, spearheaded by Tendulkar, signify something important about the transformation of Indian society and its economy over the last quarter of a century. It suggests that there is a growing market for foreign-branded luxury consumption.

BMW has recently taken steps to align itself with the ‘Make in India’ initiative, which was announced by Prime Minister Narendra Modi in September 2014 to market India as the global ‘destination of choice’ for Foreign Direct Investment (FDI) in manufacturing. In 2015, BMW announced plans to increase locally-manufactured content in its cars and SUVs from 20 per cent to 50 per cent and openly identified with Modi's industrial policy agenda (Subramaniam, 2015).

To help promote this decision, BMW marketed a video with Sachin Tendulkar, tagged on social media as ‘#SachinMakingBMW: Legendary sportsman Mr. Sachin Tendulkar marked the occasion in a unique way by assembling a BMW 5 Series using parts from Indian auto component suppliers’ (BMW India, 2015). This video encapsulates much of the face of Indian automobile production today, including branded luxury consumption, celebrity glitz and social emulation. It also demonstrates how these features of the industry are complementing efforts by local states to encourage the world to set-up new bases for mass production and consumption across India.