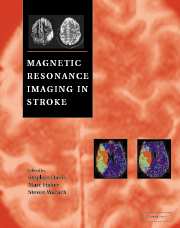 By
William A. Copen  and
A. Gregory Sorensen
Edited by
Stephen Davis ,
Marc Fisher  and
Steven Warach
Show author details

Perfusion is the circulation of blood through living tissue via a capillary bed that permits transport of oxygen, nutrients and other substances to and from the bloodstream. Correspondingly, perfusion-weighted magnetic resonance imaging (PWI) encompasses a set of techniques that create images depicting hemodynamics at the microvascular level. This is in contrast to vascular imaging studies such as magnetic resonance angiography that show changes occurring in larger arteries and veins. The pathological event initiating ischemic stroke often originates in such larger vessels. However, infarction is directly caused by an impairment of perfusion, that is, an inadequacy of circulation through the capillary bed of affected brain tissue. Therefore, PWI offers the opportunity to study the pathophysiological events that lead most directly to ischemic damage. In some cases, these events are largely or completely undetected by techniques that study only larger vessels. Furthermore, when brain tissue is threatened but not irreversibly damaged by impaired perfusion, the cerebral vasculature exhibits characteristic and identifiable responses that can be identified by PWI. For this reason, PWI may play an important role in guiding therapeutic rescue of tissue that is threatened by ischemia.

This chapter first reviews the techniques employed in PWI, beginning with the role of contrast agents, and the MR pulse sequences that are usually chosen. The postprocessing algorithms that are used to convert raw data into clinically interpretable perfusion-weighted images are then presented. Finally, the clinical interpretation of perfusion-weighted images is discussed.