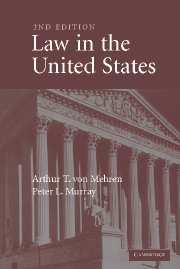 CHAPTER 1 - THE SOURCES OF AMERICAN LAW

A consideration of the sources of law in a legal order must deal with a variety of different, although related, matters. Historical roots and derivations need explanation. The system's formal allocation of authority over the creation and adaptation of legal rules and principles deserves attention, as do the manner in which legal rules are presented and the processes of analysis through which they are applied. Finally, those structural features somewhat particular to the legal system that may affect significantly its general style and operational modes should be discussed.

Historically speaking, American private law's source is the English common law. The reception on the North American continent of the common law is considered in Chapter 2, The American common law. A few words can be said here respecting certain structural features of the common law thus received that have particular importance for American law's general style and modes of operation.

The common law makes extensive use of juries in the administration of civil as well as criminal justice. The jury, which always deliberates separately from the judge, is basically responsible for deciding disputed issues of fact. Widespread use of juries carries with it a number of consequences, some of which are mentioned later in this chapter or considered in greater detail in Chapters 6 and 8. These include concentration of the trial at first instance into a single episode, the development of a sophisticated and complex body of exclusionary rules of evidence, and giving community feelings and views greater weight in the administration of justice than is the case where professionals alone bear responsibility.