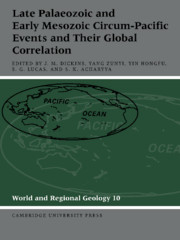 6 - Succession of selected bioevents in the continental Permian of the Southern Alps (Italy): improvements in intrabasinal and interregional correlations

It is well known that determinations of stratigraphic subdivisions and, especially, correlations of continental sediments often are hampered, even on the regional scale, by discontinuities in sedimentary strata, whose rates of sedimentation often were highly variable and discontinuous, and by the fact that there had been episodic palaeogeographic and environmental control of pull-apart basins, where floras and faunas could vary because of differing ecological situations. Virtually all of those obstacles can be bypassed by using “unconformity-bounded stratigraphic units” (NASC, 1983) in an intrabasinal lithostratigraphic district. Unfortunately, when considering interregional correlations, chronostratigraphic and geochronologic units must be used. These “high-level” units, in turn, need to have clearly defined stratigraphic limits (boundaries), and their fossil contents should already have been well studied and illustrated. These are recommendations from the International Stratigraphic Guide (ISG) (Hedberg, 1976). However, we rarely find ourselves working under conditions that allow full compliance with the ISG recommendations.

At present, our difficulties in chronostratigraphic correlations of continental Permian sediments have resulted from several causes: (1) The primary cause is their discontinuous depositional settings; (2) The second cause is that their biologic contents are not always completely known, having been poorly studied or poorly illustrated; (3) A third problem arises because of confused and unclear chronostratigraphical utilization over hundreds of years; (4) The stratotypes of the boundaries often have not been exactly defined, probably because the boundaries do not crop out at the type localities. In conclusion, the use of any chronostratigraphic unit in the continental Permian is still confusing.