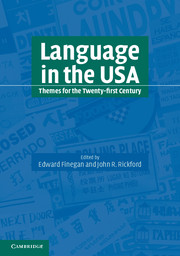 It is almost a quarter of a century since Cambridge University Press published Language in the USA, edited by Charles A. Ferguson and Shirley Brice Heath. In his foreword to the 1981 volume, Dell Hymes noted that it was “the first book to address the situation of language in the United States as something to be known comprehensively and constantly to be better known.” Since then, Language in the USA has come to be widely used and appreciated as a resource for students of language, for teachers, and for a general public seeking a comprehensive, accessible introduction to the linguistic richness and variability of the United States.

While deeply inspired and influenced by Language in the USA, the present volume is not intended as a revised edition of the original, and even less as a replacement for it. Several chapters in the original have become classics in their own right. Others are timeless. Even those that seem less relevant now are of historical interest. We plan to draw on both volumes in our classes, and we believe other readers will also want to retain the resources of both. Only four of the original Language in the USA authors (Fishman, Nichols, Wolfram, and Zentella) recur in this book, and in each case they do so with new chapters.

The purpose of this new volume is to take a similarly comprehensive, but necessarily selective, look at language in the USA, but through the lenses of today's issues and contemporary developments – ones that characterize the beginning of the twenty-first century.