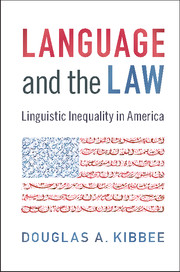 1 - Equality, Liberty, and Fairness in America

“All men are created equal” is the first “self-evident truth” of the Declaration of Independence. However, clearly they are equal only in their fundamental humanity, not in their physical attributes or mental talents. These natural differences create distinctions both rational and irrational. The law is called upon to regulate these distinctions, to ensure rationality while preserving liberty through the institutions of a democratic state. Is distinction based on language natural and rational, or arbitrary and irrational? In the following pages we will examine the determination of legal and illegal distinctions, in national and international frameworks.

Distinction based on race and gender has been the primary focus of rights in the United States. The Fourteenth and Fifteenth Amendments, so crucial to our notions of equality, were added to the Constitution in the first years after the Emancipation, shortly after the Civil War, to address the rights of African-American former slaves. But other targets of discrimination have always been part of our history. America is the land of Manifest Destiny and a land of immigrants. The history of discrimination against speakers of other languages, against speakers of other varieties of English, and of restrictions on certain types of English is as old as European settlement of the continent.

The percentage of Americans born on foreign soil is today at its highest level in over a century. Today, 60 million Americans – more than 20 percent of the population – speak a language other than English at home, and more than 13 million speak English “less than well” (in self-reported census responses).

The triumph of English has been taken for granted, even though English speakers were not dominant in the earliest period of colonization. Even when English became dominant in the thirteen colonies, the rest of the territory that would become the United States was populated mainly by Native Americans and by speakers of French and Spanish. The expansion of the United States was accompanied by anglicization or marginalization of non-English speakers. Territorial expansion favored policies encouraging immigration, while at the same time fanning the xenophobia of the already established English-speaking populations.