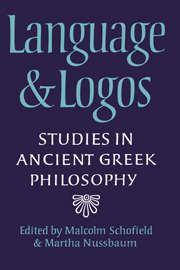 4 - Cratylus' theory of names and its refutation

At the very beginning of Plato's Cratylus Hermogenes explains Cratylus' view by saying that it supposes there to be a certain natural correctness (orthotēs) of names; that this correctness is the same for all linguistic groups; and (very strongly) that it has nothing to do with what name anyone actually applies to anything – so that, he is quoted as saying to Hermogenes, ‘your name would not be Hermogenes, even if everyone called you that’ (383B). This last point implies something which explicitly emerges later, that, for Cratylus, the question whether some word ‘N’ is the correct name of a given item is the same as the question whether ‘N’ is that item's name at all.

The assumption that the answers to those questions must be the same is not shared by everyone in the dialogue. It is shared by Hermogenes, for reasons which are (roughly) the opposite of Cratylus'. It is not shared by Socrates, whose final position requires us to distinguish the questions; or rather, to put it more precisely, it requires us to make a distinction which can be handily put by us in terms of a possible divergence between the name of X and the correct name of X, and is often so put in the dialogue, but which can also be expressed, as we shall see later, in terms of two kinds of correctness.

In trying to give some account of Cratylus' theory of names, I shall particularly emphasise that distinction and Cratylus' denial of it.