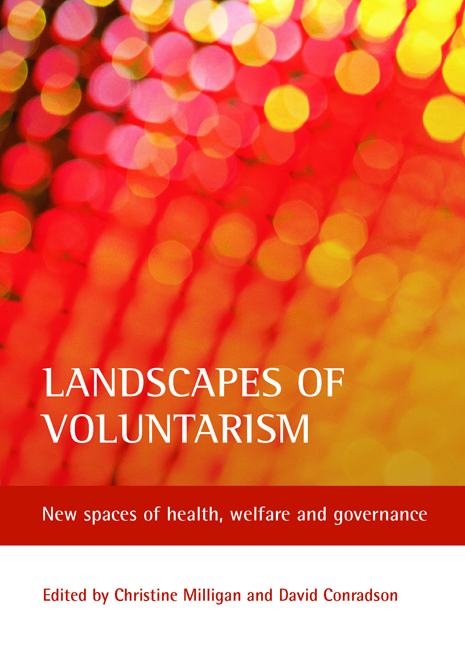 Landscapes of Voluntarism
New Spaces of Health, Welfare and Governance
Buy print or eBook[Opens in a new window]

two - A ‘new institutional fix’? The ‘community turn’ and the changing role of the voluntary sector

Why has the voluntary and community sector become increasingly fashionable in social policies over recent years? This chapter explores how policies for regenerating deprived areas and tackling different aspects of social exclusion in the UK have taken what we describe as a ‘community turn’ which embraces an enhanced role for the voluntary and community sector (Imrie and Raco, 2003; Taylor, 2003).

The basis of our argument is that the voluntary and community sector appears to serve as a putative solution to a number of governing dilemmas. It offers governments the prospect of addressing, and being seen to address, intractable problems through welfare services provided beyond the state, which are thought to involve lower costs while being effective and innovative.

In turn we discuss three major tools of the ‘community turn’ at local level – governance, partnership and capacity building – to explore how relationships between local government and voluntary organisations are being reshaped. We argue that the emergence of an enhanced role for the sector can fruitfully be seen as part of an attempted ‘institutional fix’ (Peck and Tickell, 1994) in a broader project to restructure the postwar welfare state in an era of fiscal constraint.

The chapter concludes by considering the broader geographical consequences of the ‘community turn’ for voluntarism and for the changing ‘postnational’ welfare state. We suggest that the ‘community turn’ involves specific constructions of space, scale and temporality, which not only have important consequences for the shape and structure of the emerging welfare state, but also for the construction of a differentiated voluntary and community sector.

Before being heckled and given a slow hand-clap by the Women's Institute triennial conference in June 2000, the UK Prime Minister Tony Blair neatly summarised the importance of ‘community’ and ‘community renewal’ to the New Labour ‘project’ of responding to a rapidly changing society:

At the heart of my beliefs is the idea of community. I don't just mean the local villages, towns and cities in which we live. I mean that our fulfilment as individuals lies in a decent society of others.