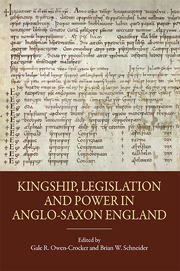 Kingship, Legislation and Power in Anglo-Saxon England
Buy print or eBook[Opens in a new window]

From the earliest days of kingship and royal government in Anglo-Saxon England, the context in which kings were most likely to have been observed by their people displaying their status, dispensing their treasure and exercising their power, was at an assembly. The spectacle must have been as much a part of any such occasion as whatever business might have been conducted, or ceremonies performed. No less important, one imagines, was the impression made as the king and his entourage moved from one place to another, and from another place to the next assembly. Nor should one underestimate the opportunities which such occasions provided for plotting, as well as gossiping, for making enemies as well as friends, and of course for feasting and entertainment. Royal assemblies of one kind or another are visible in the historical record from c. 600 onwards, though it is only in the tenth and eleventh centuries that the material is plentiful and diverse enough (by the standards of historians of the pre-Conquest period) to provide a good foundation for the study of a form of royal government which could claim to represent a distinctive product of its age.

It is possible to form an impression of the range of places where such assemblies were held, and of their timing, frequency, and duration. It is also possible to get a fair idea of attendance at the assemblies, and of the range of business conducted at them. By analogy with practices often better recorded elsewhere than in Anglo-Saxon England, we have to bear in mind at the same time the significance of ceremonial of many kinds (processions, celebrations, declarations, commemorations, acclamations and inductions, as well as displays of contrition, reward and generosity, to name but a few), all inseparable from the forms of divine service and other religious ritual appropriate to the season, the ceremonial, and the occasion. Central, none the less, to our perception of royal assemblies is the extent to which the written word, in Latin and in the vernacular, played a part in the proceedings.