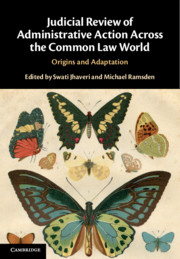 6 - The Constitutionalisation of English Judicial Review in Ireland

from Part III - Origins and Adaptations in the British Isles

The constitutionalisation of Irish public law – first on independence in 1922 and then in 1937 on the adoption of the Irish Constitution – has had a marked effect on the development of Irish administrative law. My two objectives here are, first, to describe the constitutional influences on the development of Irish administrative law and, second, to demonstrate that Ireland has an indigenous administrative law. I begin in Part I with a brief historical introduction before moving in Part II to a discussion of the influence of the Constitution. In some areas, notwithstanding the adoption of the Constitution, legal life has gone on as before. The supervisory role of the superior courts has continued mostly unaltered, despite constitutional language that might be thought to justify a more intrusive judicial review jurisdiction. The law in relation to procedural fairness has been constitutionalised – and has a bespoke term, “constitutional justice” – but is not markedly different in substance from the English equivalent. However, there have been some important changes. With sovereignty residing in the People, rather than the Crown, the prerogative has been held not to have survived the transition to a new constitutional order. The permissible scope of delegation of power by the legislature has also been circumscribed. The constitutionalisation of judicially enforceable fundamental rights, meanwhile, meant that Irish administrative lawyers followed a ‘rights-based’ approach before their counterparts elsewhere in the common law world began to think in such terms. Finally, even though the supervisory role of the superior courts remains intact, it now has constitutional protection, such that limitations on access to judicial review are strictly policed and, potentially, unconstitutional. In Part III, I will tentatively suggest that the existence of the Constitution, and thus of an identifiably indigenous Irish administrative law, has prompted Irish judges to be self-confident enough to refuse to follow settled English law. There are some important areas where Irish administrative law has not tracked English administrative law, most notably in relation to error of law and procedural exclusivity (which has had a particular effect on the development of the law of legitimate expectations). In these areas, the Irish courts have operated in the shadow of English law but have sought to develop an indigenous approach.