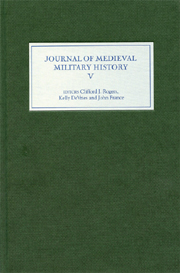 That our descriptions of some forms of medieval military technology suffer from a frustrating lack of specificity is well-known to historians of the period. This modern thirst for precision is frustrated in most other areas of medieval research as well, and distinctions most of us believe to be clear and natural are not always so; even basic terms like monachus and canonicus, Templarius and Hospitalarius, oblatus and donatus, were sometimes used in pairs or in ways that seem to presume a degree of interchangeability. Military history is not immune from such difficulties, and perhaps the most well-known example is the term ballista, which is used in ways that can mean anything from a personal crossbow to a larger siege weapon. This brief communication employs a unique source in an effort to explore further our vocabulary associated with ballistae and their accouterments, touching as they do in this instance upon the broader interplay of late medieval military and orological technologies, and to consider the implications of sometimes contradictory evidence which emerges from non-technical texts and image-laden treatises of a more technical origin.

The source in question originated at San Lorenzo in Campo, a Benedictine house in the northern portions of the modern Marche, approximately twenty-five kilometers northwest of Ancona and twenty-five kilometers southeast of Urbino. Its origins before the eleventh century are unclear, and the exact means by which the monastery became integrated into the defense system of the city of San Lorenzo remains a mystery, although one local and likely apocryphal tradition places the event within the reign of Theodoric the Ostrogoth.