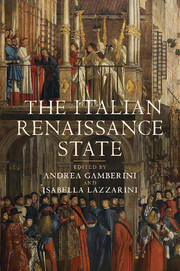 Of all the princes in Europe, the popes alone ‘have states, and do not defend them; and have subjects, and do not rule them’. From Machiavelli onwards, the peculiarities and insufficiencies of the papal state have been pointed out countless times. Jacob Burckhardt spoke of ‘a thorough anomaly among the powers of Italy’, and the most recent research on the Italian Renaissance states as a whole has defined the papal dominions as ‘an area of utter peculiarity’. Indeed, anyone who studies the papal state has to reckon with systems of power and institutions which were often unusual and at times totally unique. The very peculiarities of the temporal power of the popes will thus be one of the themes of this chapter. As well as illustrating characteristics and peculiar features, however, I shall also follow a quite different thread, seeking to highlight the many aspects of the papal state which were held in common with other, contemporary states, while at the same time stressing how some important aspects of the Renaissance state were particularly emphasised in that of the papacy.

In order to follow these two major themes, this chapter will be divided into seven parts. Three will sketch an outline of political events, mechanisms of government and territorial assets. The remainder will deal in various contexts with the idiosyncrasy and at the same time the representativity of the papal state. The analysis will focus on concepts of power and of the state: the characteristics of the remarkable double-sided sovereign figure of the pope, reigning at the same time over the universal church and a regional state (a ‘double-headed Janus' as this has been termed); the relations between the Holy See and the different subjects of its temporal dominion, in particular the signori, the Roman barons and, above all, the communal cities and their ruling elites/groups. More generally, I will focus in particular on the links between the specific characteristics of papal sovereignity and the composite nature of its territorial dominions.