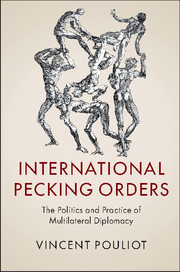 Introduction: All the world's a stage

Being a state diplomat – that is, speaking and acting as the recognized representative of a country – can be as exhilarating as humbling. Thanks to his unusual professional trajectory, Carne Ross experienced both sides of the coin, first as a British delegate to the United Nations (UN) and later as consultant for stateless peoples for the non-governmental organization (NGO) Independent Diplomat. The contrast could not have been starker: “When I was with the British mission, officials of the UN or other countries paid attention when we spoke. Doubtless this was often faked, but it was perhaps felt to be required, given Britain's place in the UN pecking order. With the Kosovars, no such deference is necessary. Junior officials become impatient with our demands and even on occasion allow themselves a perceptible sneer when they talk to us.” Ross tells of his everyday encounters with patterns of social stratification in diplomacy: “Meeting a national diplomat at the UN or a UN official is, like an audience with the King, a more difficult matter, its ease or difficulty a signifier of one's status in the obscure hierarchies of international diplomacy.” In the practice of multilateral diplomacy, he concludes, some ambassadors are “spectators at the main fight.”

For those state delegates operating along the corridors of international organizations’ (IOs’) headquarters, it is a basic fact of life that diplomacy takes place on a deeply unleveled playground. The principle of sovereign equality notwithstanding, in any multilateral setting, some state representatives weigh much more heavily than others. Practitioners often refer to this hard-nosed reality as the international “pecking order” – a term originally coined by a zoologist to describe the dominance hierarchy of hens. In his ethnographic account of UN Security Council dynamics, Ambrosetti describes a “daily social division of multilateral labor”: “The precise moment when the delegations were speaking during private consultations and public meetings and the kind of arguments and concerns they broached were not accidental. There was a pervasive form of influence at stake in the course of the interaction and in the achievement of preliminary tasks that were collectively expected.” How are international pecking orders produced, reproduced and at times contested in the course of multilateral diplomacy?

As a category of practice, pecking order stands for an analytical concept that has recently gained much currency in International Relations (IR): that of hierarchy.