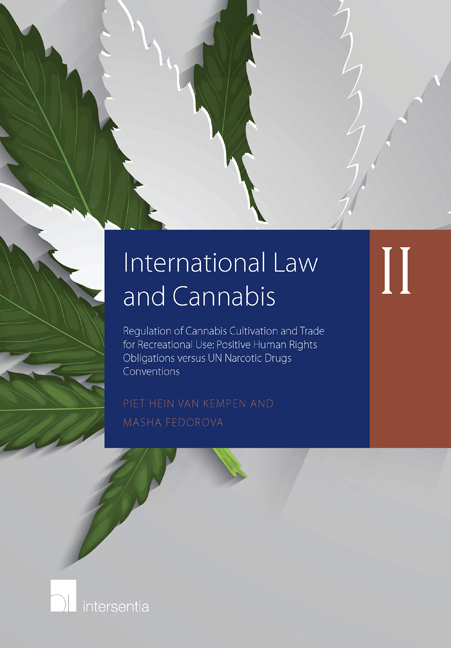 The central theme of the previous chapter was positive obligations pursuant to human rights conventions. We arrived at an affirmative answer to the key question whether regulation – through legalization, decriminalization or a policy of tolerance – of cannabis cultivation and trade for recreational use can be advocated on the grounds of rights and obligations that ensue as positive law from international human rights treaties and conventions. A strong case, and indeed the strongest case, can be made that such regulation under certain circumstances can even qualify as a positive obligation to protect human rights. This conclusion is supported by both the right to health in the ICESCR and the ESC and the rights regarding life, inhuman treatment and privacy in the ICCPR and the ECHR.

When we discussed and analysed the human rights conventions in the previous chapter, we did not take into account the obligations that states have under the UN narcotic drugs conventions. With regard to cannabis, the following conventions are particularly relevant: the Single Convention on Narcotic Drugs as amended by the Protocol amending the Single Convention on Narcotic Drugs (Single Convention), and the United Nations Convention Against Illicit Traffic in Narcotic Drugs and Psychotropic Substances (Illicit Traffic Convention). As we saw in our first book, International Law and Cannabis I, these drugs conventions undeniably aim to contribute to the interests of public health (object and purpose). These conventions do so in three ways: 1. Availability of narcotic drugs as meaningful and/or effective medicine or research into this; 2. Treatment of and care for drug users so as to wean them off these narcotic drugs; 3. Protecting society against narcotic drugs by fighting and eliminating the production, trade, possession and use of these drugs for recreational purposes by means of criminal law and many other social prohibitions and measures. Therefore, the drugs conventions do not aim to guarantee public health in a general sense, they actually imply this guarantee must be achieved strictly by applying the three above-mentioned specific perspectives. As we concluded before: the UN narcotic drugs conventions actually reveal a limited, one-sided and rigid interpretation of public health interests.