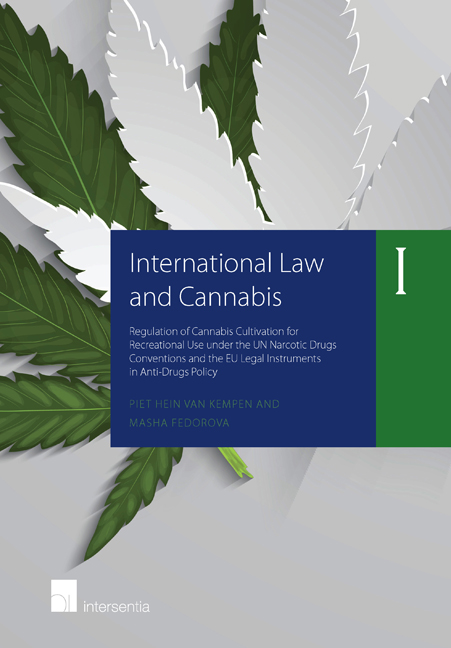 The need of citizens to have access to cannabis for recreational use poses all sorts of challenges to the authorities. In the Netherlands, for example, not only does the so-called soft drugs policy almost continually give rise to discussions, but it also brings up the legal, social and political conundrum of how the authorities should deal with the cultivation of cannabis for the supply of retail shops. Meanwhile, new phenomena are developing that generate similar questions. For example, the joint cultivation and consumption in so-called Cannabis Social Clubs. In several countries around the globe there are issues around cultivation, trade, distribution, sale and purchase of cannabis for recreational use. This makes the subject of this book topical, much-talked about and at any rate, socially relevant.

The key question in this book, which strictly focuses on matters from a legal point of view, is whether legalization, decriminalization, policy-based tolerance and/or other forms of regulating cannabis cultivation for recreational use is permissible under international law on drug control. The assessment expressly also focuses on the question to what extent the arguments and initiatives for the regulation of cannabis cultivation in and outside the Netherlands can be squared with relevant international law such as European law and the UN narcotic drugs conventions. More specifically, this concerns the UN 1961 Single Convention on Narcotic Drugs as amended by the 1972 Protocol, the UN Illicit Traffic Convention, the so-called EU Schengen acquis, the EU 1996 Joint Action on Illegal Drug Trafficking and the EU 2004 Framework Decision on Illicit Drug Trafficking. The book does not look at the question of how cannabis use and the fight against this relate to individual freedoms and the duties of the state with respect to international human rights law.

To arrive at substantiated answers to the questions addressed in this book, the preceding chapters contain an elaborate and detailed explanation and analysis of relevant international law. Apart from the above-mentioned international legal instruments, we have also reviewed the findings and opinions of the international bodies that are designated to supervise the said instruments, particularly those of the International Narcotics Control Board (INCB), the Commission on Narcotic Drugs (CND) and the Court of Justice of the European Union (CJEU).