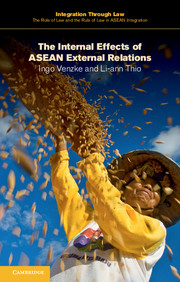 1 - Introduction and parameters of inquiry

This contribution sets out the legal effects of ASEAN external agreements within ASEAN Member States, with regard to the relationship between ASEAN as an International Organisation and its members. In particular, it demonstrates how ASEAN practice in relation to its external relations is, on the whole, likely to contribute to an increased role for the ASEAN Secretariat.

Agreements with non-ASEAN Member States usually take the form of international treaties between state parties, which is the second type of agreement. Such agreements may well be read in a rather uncontroversial manner to suggest plainly that they are plurilateral agreements indistinguishable from other international law agreements. There is nothing specific about them when it comes to internal effects or otherwise. We discuss their internal effects within Member States from the points of view of both international law and, in a comparative perspective, domestic constitutional law. Since knowledge about the constitutional practices of ASEAN Member States with regard to the internal effects of international law is uneven and in any event rather sparse, this part of the argument largely models different possibilities. As yet, we do not have sufficiently evolved case-studies on the internal effects of these plurilateral agreements. We draw on ASEAN Member States’ domestic practices to the extent that we could gather it. We note, and are aware, that our access and thus knowledge is distributed unevenly, with most references stemming from the Singapore context. In light of the need for further studies in this regard, for now, we further engage in a specific case study of the implementation of the Convention to Eliminate All Forms of Discrimination Against Women (CEDAW). We do so for inspiration and by proxy, believing that this is illuminating and helpful for readers in imagining what impact ASEAN plurilateral legal relations might have.