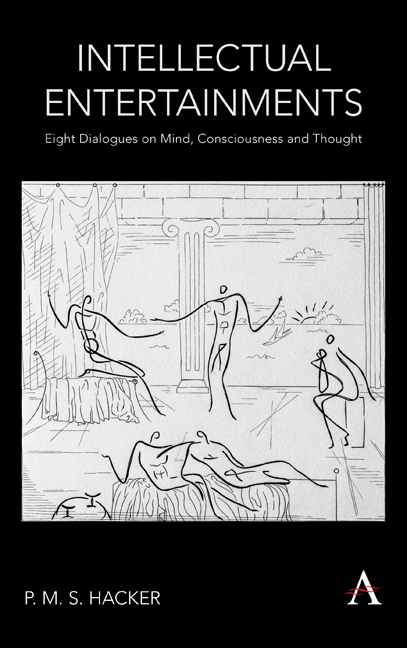 Third Dialogue - The Mystery of Consciousness

A Stranger: late-middle-aged philosopher from Vienna; dressed in a dark suit, with a bow tie; pronounced German accent, coupled with a speech mannerism of punctuating his remarks with a slight ‘Hmm’ or interrogative ‘uh?’ A remote intellectual descendent of Plato's Eleatic stranger in The Laws. He is obviously familiar with the works of Wittgenstein.

Bruce Palmer: an eminent Australian philosopher, a member of the self-styled ‘consciousness studies community’; in his mid-thirties; relaxed; amiable; pronounced Australian accent; dressed in T-shirt and jeans. His views are a synthesis of many different views among philosophers who have nailed their colours to the masts of cognitive science.

The scene is a small Oxford Common Room. The room is panelled. Oil paintings of past fellows and of presidents hang from the picture rails. There is a bust of Socrates on a stand in the corner. Lighting comes from the central chandelier and sconces on the walls. A fire is flickering in the fireplace. There is a well-stocked bookcase against one wall. There are five comfortable leather armchairs arranged around a low central table with books and papers scattered on it. On one side is a sideboard on which there are glasses and bottles of postprandial drinks. Bruce Palmer, Christopher Cook, Adam Blackstone and his Viennese guest are helping themselves to drinks.

Adam: Well, gentlemen, if you all have your drinks, let's sit down and start our discussion. [The others take their seats] I asked you to dinner tonight so that we might spend an hour or so after the meal discussing that most vexatious subject – consciousness. And I've asked my old friend from Vienna to join us. He is devoted to philosophy, and will, I am sure, be able to shed some light on this subject.