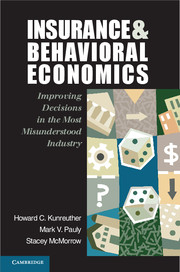 9 - Anomalies on the Supply Side

This chapter focuses on empirical examples of specific types of anomalies by insurers and those who supply capital to insurers. They may be caused partially by some of the concerns of insurance firm managers discussed in the previous chapter, such as fear of insolvency and the impact that this would have on their future job prospects. They may also be due to the effect rating agencies and regulators may have on the premiums insurers can or want to charge and the reserves they are forced to hold. Other deviations from benchmark supply behavior may be a result of the decision processes and heuristics used by insurance managers.

We first consider specific examples of insurer firm and manager behavior that do not adhere to the benchmark supply model and attempt to identify which, if any, of these behaviors can be classified as anomalies. We then consider anomalous behavior on the part of investors and other capital suppliers to insurance firms that create supply problems for insurers.

DECISION TO OFFER OR NOT OFFER TERRORISM COVERAGE

Insurers, like everyone else, have difficulty dealing with the uncertainty associated with terrorism. The likelihood of an attack is highly ambiguous and the actions taken by terrorists may change depending upon what protective measures are undertaken by those at risk. This latter feature distinguishes terrorism risk from other low-probability, high-consequence risks, such as hurricanes and other natural catastrophes where nature does not try to outwit the adoption of preventive measures and where catastrophe models using scientific and engineering data can help insurers determine premiums.