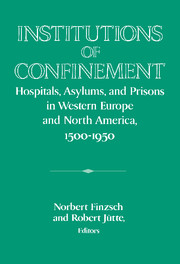 Institutions of Confinement
Hospitals, Asylums, and Prisons in Western Europe and North America, 1500–1950
Buy print or eBook[Opens in a new window]

The prison situation at the end of the eighteenth century can best be described by a quotation from Albrecht Heinrich von Arnim, the Prussian minister of justice:

Most penal institutions are linked with orphanages, homes and mental hospitals; the different classes of inmates are hardly ever separated; the buildings are not safe and sturdy enough, which means that escapes are very common; the administrative staff is too small and inappropriate.... No consideration whatsoever is shown for health care, hygiene, or discipline, neither in the penal institutions nor in the jails. In the Küstrin town jail there is a lack of daylight and fresh air; in the Danzig casemates, water runs down the walls all the time, and the rooms cannot be heated.... The Elbing jail consists of a ten-square-foot vault, eight feet deep ... the floor is made of a mound of rubble and rubbish ... and within it there were four people, including a man accused of stealing a horse, a fourteen- to sixteen-year-old boy and a maid who had to sit behind bars for another week owing to a misdemeanor against her master and mistress.... Even in penal institutions, due attention is not paid to the separation of the sexes: pregnancies are by no means rare, childbirths are kept secret, the murdering of newborn babies is a fact. In addition to this lack of discipline, the inmates were treated extremely roughly: as a rule, they were tied up, flogged, and otherwise abused.

At the beginning of the nineteenth century, different types of penal institutions existed in the territory of the German states. There were prisons for punishing convicted criminals and prisons for the detention of suspects and persons accused of crimes. These institutions endeavored to deprive the detainees of their liberty and not to inflict physical pain. Of necessity, however, inmates had to be restrained by chains, and they often had to suffer the indignities of dungeon fever.