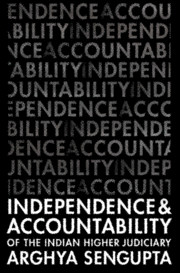 from PART I - THE INDIAN EXPERIENCE

During the career of Judges, many carrots are held out to deflect judicial performance from the path of rectitude. Judicial afternoons and evenings are sensitive phases, the incumbent being bothered about post-retiral prospects. The Executive plays upon this weakness to bend the integrity or buy the partiality of the elderly brethren.

The employment of retired Supreme Court and High Court judges in government-appointed positions following their retirement is an increasingly common phenomenon in India today. Retired judges are called upon to preside over tribunals, chair statutory commissions and conduct commissions of enquiry, besides fulfilling a number of other key governance roles. The government justifies such post-retirement employment on the grounds that these positions require judicial personnel of the highest integrity and nothing in the Constitution prohibits employing retired Supreme Court and High Court judges who are considered suitable for the purpose. At the same time, from the point of view of retired judges, such employment gives them an opportunity to contribute to the public good at an age when their mental faculties are still sharp and provides them with a standard of living comparable to their previous entitlements as a Supreme Court or High Court judge.

Though mutually beneficial for retired judges and the government, from the point of view of public interest, the matter is much more serious and subtle than such a simplistic summary might suggest. Most crucially, as Justice Krishna Iyer's trenchant observation demonstrates, the prospect of post-retirement employment can severely damage judicial independence. Justice Krishna Iyer is not alone in identifying these insidious effects of post-retirement remunerative employment of judges by government. P. K. Sen, K. T. Shah, H. V. Kamath, K. Santhanam, M. A. Ayyangar, Naziruddin Ahmad and Jaspat Roy Kapoor spoke in the Constituent Assembly of the specific need for the Constitution to prohibit such employment; the seminal 14th Report of the Law Commission of India came down heavily on the practice, arguing that it not only affected judicial independence but also eroded the dignity and high status of the judicial office; Seervai too advocated a complete prohibition, conditional on an increase in judicial salaries and pensions, reasoning that the independence of the judiciary was more significant than the need to have judicial members presiding over tribunals and commissions.