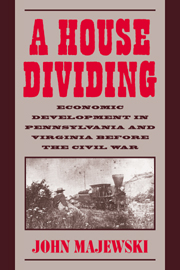 In 1858, Abraham Lincoln proclaimed that America was a “house divided.” The political agitation over the extension of slavery into the western territories had convinced Lincoln that America was at a crossroads. “Either the opponents of slavery, will arrest the further spread of it, and place it where the public mind shall rest in the belief that it is in course of ultimate extinction; or its advocates will push it forward, till it shall become alike lawful in all the States, old as well as new – North as well as South.”

The latter possibility terrified many Northerners, and not only because of the growing conviction that slavery corrupted republican politics and undermined Christian morals. Many believed that the institution had stripped the South of entrepreneurial vigor and enterprise, leaving in its wake unprofitable plantations, stunted cities, and widespread poverty. When New York politician William Seward visited Virginia, he found nothing but “[a]n exhausted soil, old and decaying towns, wretchedly-neglected roads, and, in every respect, an absence of enterprise and improvement.” Seward and other Republican spokesmen contrasted the degradation of the slave South with the well-kept farms, growing cities, and technological advances of the free-labor North. Northern pessimism about the South's economic prospects was so widespread that historian John Ashworth has argued that “the Republicans fought the Civil War primarily because they deplored the economic effects of slavery.” Ashworth may overstate the point, but the rapid economic divergence of the North and South undoubtedly provided fertile ground for the ominous predictions and stark dichotomies outlined in Lincoln's “house divided” speech.