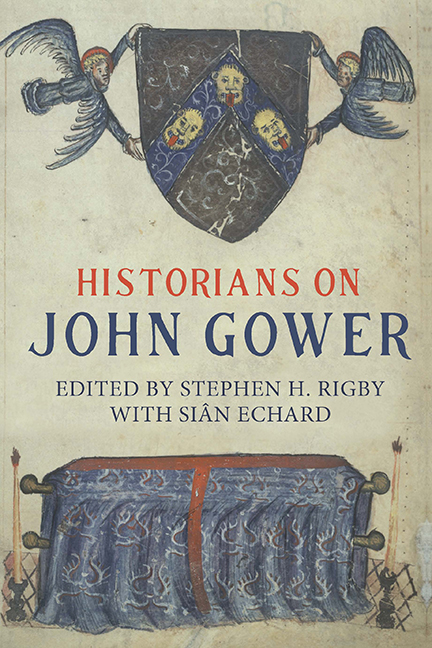 Gower's works were written during a formative period in the evolution of the judicial system and the legal profession. In particular his poetry was influenced by, and bears witness to, an expansion in the legal system and concomitantly of those staffing its institutions and facilitating the resolution of disputes. This expansion flowed from a heightened intensity in royal governance during the course of the thirteenth and fourteenth centuries with the number of judicial commissions and the amount of parliamentary legislation steadily increasing with a corresponding growth in the level of the supervision and regulation of daily life. New laws, notably the labour legislation and a range of economic and criminal offences required strict enforcement at the local level in order to be effective. Unsurprisingly, searching inquiries frequently revealed corruption and injustices on the part of royal and local officials.

Richard II's reign saw fresh expectations about the legal system fuelled by enhanced accessibility of legal mechanisms and the greater availability of legal practitioners. They were expectations that could not wholly be met, however, as the system was already creaking under the weight of the public and private business which was coming before the courts. While royal government attempted to respond to the social and economic challenges of the period with new legislation, it ended up confounding these new expec-tations by confirming stereotypes and prejudices as well as perpetuating injustices. In particular there was much criticism by contemporaries of the outlay necessary for pursuing litigation, of the remuneration required by lawyers for their services and of the profits available for those involved in the administration of justice. Legitimate relationships with patrons and payment for work done led to a focus not only on the processes of law (which were oiled by gifts and fees) but also on their social consequences: an accumulation of wealth evidenced by conspicuous consumption and social mobility. In an adversarial legal system where there were bound to be winners and losers, dissatisfaction inevitably centred on those within the system who gained whatever the outcome: the judges and lawyers. It is not surprising therefore, that the legal system and the legal profession were the subjects of voluble complaint, biting satire and suggestions for reform even before Gower entered the fray.