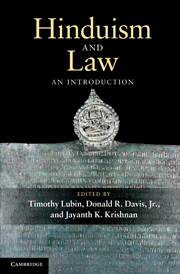 Chapter 10 - Law, literature, and the problem of politics in medieval India

It was a great occasion, with all the appropriate fanfare. The capital city stood in the center of a windswept plain. The air must yet have borne a chill that day, but one that foretold the return of warmth and life to the kingdom and its subjects. For this particular holding of court marked a special moment, when the sun reached the end of its northward journey, and began its return to the south: It was the shortest day of the year, and the promise of new life that it held called for a celebration. At its center, shaded by a parasol and flanked by fan bearers, stood the king. The appropriateness of the occasion was probably lost on no one who was present, for was not the king called Vikramāditya, Sun of Valor? It was a name held by generations of his ancestors, with a pedigree stretching back even further, to the greatest king of the old legends.

The notables of the kingdom flocked all around Vikramāditya: his queens and their children, members of his family both near and distant, his generals and guards, the lords of the realm. Perhaps there was a deputation of the Five Hundred Masters, the far-wandering merchant syndicate from the dynasty’s ancient homeland, complete with their ceremonial peddler’s bags and daggers; and perhaps there were embassies there from the courts of the king’s relations, allies, and enemies. Certainly there were Brahmins; an important event like this needed to be celebrated with food offered and gifts given to them. Among them, there are two we may single out. The first was a renunciant, a man who had voluntarily extinguished his ritual fires, and so proclaimed his death to worldly life. Accompanied perhaps by other members of his order, his body bearing the signs of the conch and discus of Viṣṇu, he would have carried a beggar’s bowl in his right hand and a staff of three reeds lashed together in his left, a staff – we may be certain – not a finger’s breadth higher than the top of his head. His presence at court surely merited curious and respectful attention, for he was not merely some sannyāsin come for a free meal, but a man renowned for his astounding learning in the moral sciences, who lived up to his sobriquet Vijñāneśvara, the Lord of Discernment.