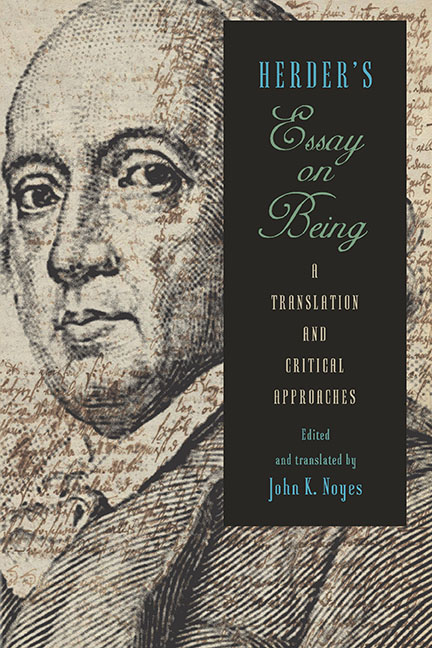 Herder's Essay on Being
A Translation and Critical Approaches

Introduction: The Essay on Being

THE IDEA FOR THIS BOOK came to me in 2014 when I taught an introductory course to the writings of Johann Gottfried Herder at the University of Toronto. The course was taught in English and examined a number of his major writings, mainly from the early period spanning the two decades from the mid-1760s to the 1780s. This was the time when, in response to a widespread crisis in the formation and formulation of knowledge, he conceived of all the groundbreaking ideas that make up the basis of his radical new approach to the disciplines of philosophy, anthropology, aesthetics, and others. Fortunately, there is an excellent body of Herder's work available in English, which, together with the increasing amount of critical scholarship in English, allows for a rich encounter with his work for those who don't speak or read German.

In order to give students a better understanding of how Herder's central ideas had emerged from his philosophical training, however, I wanted them to be able to read his first fully formulated essay, Versuch über das Sein (Essay on Being, 1763–64). This difficult piece provides essential insights into the intellectual platform which launched his life's work. I completed a rough translation, which we used in class; it was a very rudimentary English sketch of the Essay, and I'm grateful to my students for helping me work through some of the problems in that early version. Subsequently I found myself returning to my translation and gradually refining it to the point where I felt it was appropriate to share this text, little known in the English-speaking world, with the academic community.

Some texts occupy a decisive moment in the history of ideas or in an individual's philosophical development, yet remain more or less invisible in the larger picture that is the history of philosophy. If texts were the stars in the night sky, these would be the ones whose light pales when compared to the brightest stars: Sirius, Arcturus, Canopus. Yet the fainter stars such as Polaris and Acrux are the ones that provide orientation. In the same way, the less prominent philosophical texts hold a different kind of key to some of the larger secrets of the conceptual constellations of the past.