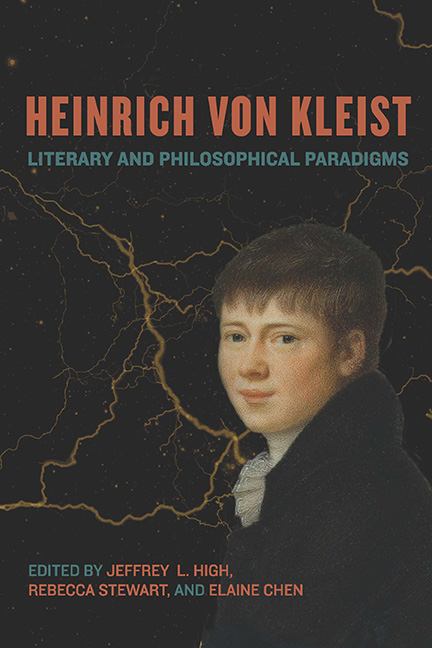 MICHAEL KOHLHAAS (1805–10) remains one of the most well-known and most disturbing works in the German literary tradition. In addition to fascinating two centuries of readers and authors, Heinrich von Kleist's (1777–1811) novella has attracted an exceptionally large amount of critical reflection without, however, scholars having reached any interpretive consensus on the work's central problem, namely the problem of determining the story's moral value. How should the reader judge the protagonist's actions? Should his rampant campaign of vengeance be denounced as a perversion of justice or is his reaction to the injustices of the world somehow noble and laudable? Is Kohlhaas fundamentally good or horrifyingly evil? A criminal or a hero? Are his actions just or unjust?

The difficulties in arriving at perfect moral clarity on this core issue are mirrored by Kleist's narrator's persistent vacillations. On the one hand, the protagonist is presented charitably as a noble and honest man, as the unfortunate victim of corruption and conspiracies. On the other hand, however, Kohlhaas is also characterized as a raving “Wütherich” (violent madman) and a criminal “Mordbrenner” (murderous incendiary; MA 2, 39; SW 2, 38), whose published demands are described as “eine Schwärmerei krankhafter und mißgeschaffener Art” (fanatical nonsense of a sick and misbegotten kind; MA 2, 36; SW 2, 36). If readers are indeed invited to pass legal judgment, either to convict or acquit Kohlhaas, their efforts would appear to be already undermined by a narrator who does not refrain from expressing a series of moral assessments and yet remains incapable of deciding on the case as a whole.

Hence, behind the basic problem of passing a clear-cut moral judgment lies the even more difficult question concerning the very viability of establishing any conclusive moral value on the basis of the text. The interpretive desire for moral clarity—the hermeneutic wish to condemn or exonerate Michael Kohlhaas—may itself be the goal of the author’s inordinately complicated and often ambiguous text. For arriving at an unequivocal moral assessment invariably requires that the interpreter select one set of textual evidence and ignore any other detail that might contradict the judgment being proffered.