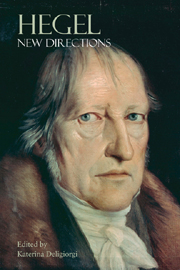 9 - Catching up with history: Hegel and abstract painting

Are Hegel's aesthetics of merely retrospective interest, a melancholy tour through the fossilized remains of past cultural greatness, as one author has recently claimed (Wyss 1997, 1999)? Or is it possible to establish the relevance of Hegel's ideas to subsequent art practice, even though art has developed in ways that Hegel himself could not possibly have anticipated? Beat Wyss's seductive but highly misleading picture of the philosopher wandering through a vast imaginary museum of his own construction, bathed in the glow of sunset and confident that history had reached its end in the task of philosophical comprehension, enacts the very ossification of Hegel's thought that it purports to criticize. Nonetheless, the enormous changes that the practice of art has undergone since Hegel's death in 1831 make the task of connecting his views to later art highly problematic. In this paper I analyse contrasting arguments for the contemporary relevance of Hegel's aesthetics that have been put forward by two of the foremost Hegel scholars working today: Stephen Houlgate and Robert Pippin. Both take the emergence of fully abstract painting in the early years of the twentieth century as an important test case, yet they reach diametrically opposed conclusions as to how abstract art should be understood from a Hegelian point of view.

It is a striking feature of contemporary debates in aesthetics, particularly in Anglo-American analytic philosophy, that whereas Kant's Critique of Judgement remains an indispensable and highly productive point of reference, Hegel's Lectures on Aesthetics are rarely, if ever, mined for enduring insights into aesthetic experience or the role of art in modern society.