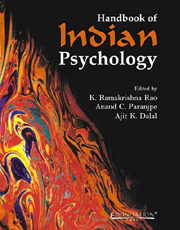 09 - Transpersonal Psychology in the Bhagavad-Gītā: Reflections on Consciousness, Meditation, Work and Love

The Bhagavad-Gītā is a major Indian text, originally a part of the Mahābhārata, and included in the Prasthanatreya, the three foundations of classical Indian thought. The Gītā presents an elaborate analysis of the human mind from the context of a foundational philosophy of active living. The context in which an integral philosophy of life and transformation is told in the Bhagavad-Gītā is the battlefield of Kurukṣetra. The scene presents a division of the kith and kin, friends and well-wishers of one great family dynasty arrayed in opposite sides to fight.

The narrative of the Gītā is of significance as the figurative and metaphorical meanings of the physical war-field lead us to the mental war-field fuelled by conflicting emotions, unexpressed fears and the lack of a stable sense of identity. The mental conflict that humans face, since ancient times, between ‘what is right’ (dharma, dharmakṣetra) and ‘what is duty’ (kartavya, kurukṣetra) is poignantly presented in the opening lines of the Gītā. The representation of Arjuna carries a global flag of mental crisis that is pan-cultural. Arjuna with his loud cries, shrouded fears and hypocritical desire for renunciation, presents a contemporary personality who is successful and efficient but with fragile and conflicting sense of identity and values.

The Gītā narrative is not a telltale story of Arjuna's depression and his predicament. What makes the Gītā narrative a transpersonal process and psychology is the continuity given with the intervention of the friend-relative and teacher-God Sri Kṛṣṇa. The teases, consolations, questionings, threats, love and revelations that Kṛṣṇa showers on Arjuna are not limited to any particular mode of psychological counselling.