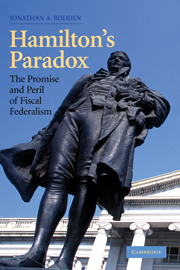 4 - THE POWER OF THE PURSE: INTERGOVERNMENTAL GRANTS AND FISCAL DISCIPLINE

The creation of Debt should always be accompanied with the means of extinguishment.

This chapter expands on a key observation from Chapter 3 that was first suggested by Alexander Hamilton: Perceptions of the center's commitment not to intervene in subnational fiscal crises are shaped in large part by the intergovernmental fiscal system of taxes, revenue sharing, and transfers. A key argument in this chapter is that when subnational governments depend heavily on intergovernmental grants, loans, and revenue-sharing schemes as opposed to subnational taxes and fees, the central government's ex ante commitment to a policy of no bailouts lacks credibility. For a variety of reasons elaborated below, when a higher-level government has undertaken heavy obligations to fund the expenditures of lower-tier governments, doubts creep into the minds of voters, creditors, and local governments about the center's ability to withstand the political costs of allowing subnational governments to default.

Hamilton alluded to this problem when expressing concerns that the states presided over insufficient tax base to sustain sovereign borrowing, making the federal government – with its deeper pockets and good credit history – an implicit guarantor. He feared that after a negative shock, borrowing by the states under these circumstances was bound to culminate in a legislative battle over debt renegotiation. For him, the solution to this moral hazard problem was not to expand the taxes available to state governments in order to firm up their sovereignty, but rather to clamp down on their access to deficit finance by placing all public borrowing firmly under the control of the central government.