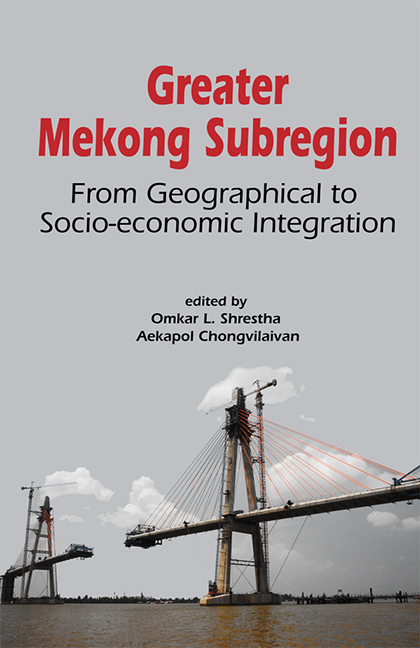 The Greater Mekong Subregion (GMS) embraces the nations and territories located in the Mekong river basin, including Cambodia, China (Yunnan Province and Guangxi Zhuang Autonomous Region), the Lao PDR, Myanmar, Thailand, and Vietnam. This diverse, dynamic subregion encompasses a huge market of more than 240 million people and a vast land area of 2.3 million square kilometres. The gross domestic product of the subregion was projected to reach US$863 billion in 2010 — more than triple the 1996 level — with Cambodia, the Lao PDR, Myanmar, Vietnam, and Yunnan Province, PRC, experiencing startling output growth rates of 6–10 per cent, despite the current global economic hardships. This is attributed fundamentally to their abundant resources, including a large motivated, cheap workforce, a rich agricultural base, extensive timber and fisheries resources, considerable mineral potentials, and vast energy resources in the form of hydropower and large coal and petroleum resources. The GMS is increasingly being recognized as a new frontier of the Southeast Asian economic strength.

The GMS enjoys a strategic location at the heart of East Asia and between the burgeoning economies of China and India. Closer economic ties to external markets offer the GMS opportunities to tap benefits from boosts in trade, tourism, and investment, which have been a crucial driving force of impressive economic growth in the subregion. The last two decades since its inception in 1992 witnessed strong growth in intra-GMS trade and investment. Cross-border trade is now estimated to account for 30–50 per cent of the GMS economies’ total trade, and has increased sharply at a compound average annual rate of nearly 10 per cent, while intra-GMS net foreign direct investment nearly doubled during the period of 2000–2002.

This chapter aims to assess the recent economic, social, and political developments in the GMS, and identify emerging opportunities and challenges facing the region's successful transition towards a market-driven economy. The GMS countries are at a critical juncture where subregional efforts and cooperation must be made to address fully the rapidly evolving issues which are vital to appropriate policy formation, yet remain widely debatable. The deliberation in this chapter sheds light on what the development stages of GMS countries are, and gives an overview of the contributions of the ensuing chapters.