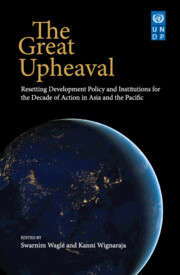 5 - Is Southeast Asia Falling into a Latin American–Style Middle-Income Trap?

Productivity isn't everything, but in the long run, it's almost everything.

The first generation of East Asian newly industrializing countries and territories (NICs-1), including Hong Kong SAR (China), the Republic of Korea, Singapore and Taiwan (Province of China), like Japan in the post-war period, and China and India since 1980, have raised the bar for other developing economies. Second-tier Southeast Asian NICs (NICs-2), including Indonesia, Malaysia, Thailand and Viet Nam, have not yet been able to replicate the NICs-1 long-term growth of gross domestic product (GDP) or labour productivity, partly because – barring Viet Nam – they never properly recovered from the 1997 Asian financial crisis. If Malaysia and Thailand, for example, had been able to sustain their pre-crisis growth rates into the 21st century, output per person could have reached US$18,900 and $17,000, respectively, ranking them among the most successful developing economies of the post-war period. However, because of slower growth from 2000 to 2019, Malaysia's GDP per capita was 70 per cent lower and Thailand's 50 per cent lower than prospective numbers, leaving both NICs-2 well below the $20,000 per capita threshold (Figure 5.1). Is it possible that Indonesia, Malaysia and Thailand are showing signs of an economic and productivity growth slowdown similar to the slowdowns in Argentina, Brazil, and Mexico?

The term ‘middle-income trap’ was coined by Gill et al. (2007), who predicted that growth in Asia would inevitably taper off as capital–labour ratios rose as economies approached the global technological frontier, which they define as the most advanced technology currently in use (Kharas and Gill, 2015). In countries with few or no natural resources, the trap manifests when middle-income countries are priced out of labour-intensive activities by cheap-labour competitors, but cannot yet challenge more technologically advanced countries because of lagging productivity levels. In countries rich in natural resources, the trap tends to manifest when they exhaust their merely extractive development model and do not move to processing their commodities.